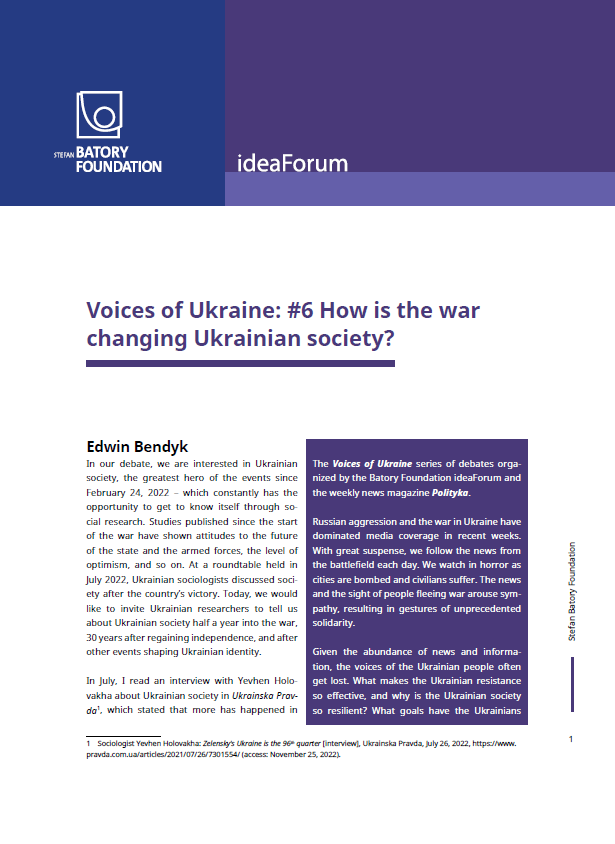 Voices of Ukraine: #6 How is the war changing Ukrainian society?

Translation of the sixth debate in the “The Voices of Ukraine” series. The main topic of the sixth discussion in the series was the changes that the war has caused in Ukrainian society. Research and sociological surveys conducted just before the invasion and during the war show that the Russian attack led to the consolidation of society and its integration around the Armed Forces, state institutions and public authorities at the national and local level. The people of Ukraine remain very optimistic and are convinced that they will win this war, even if it lasts a long time. However, war is also a constant stress resulting from threats to life and safety, economic difficulties, problems with provisions, material damage, difficulties in accessing social services, separation from relatives and fear for those fighting at the front. How to explain the phenomenon of high morale of the Ukrainian society despite all these difficulties? What might be the further evolution of moods and attitudes? How is the attitude changing towards Russia and Russians, towards allied countries, as well as towards structures such as the European Union or NATO? How has the national consciousness and value system been transformed?

The discussion took place on September 14, 2022 with the participation of Natalia Chernysh, Oleksandra Deyneko, Olexiy Haran, Yevhen Holovakha and Edwin Bendyk as the interviewer.