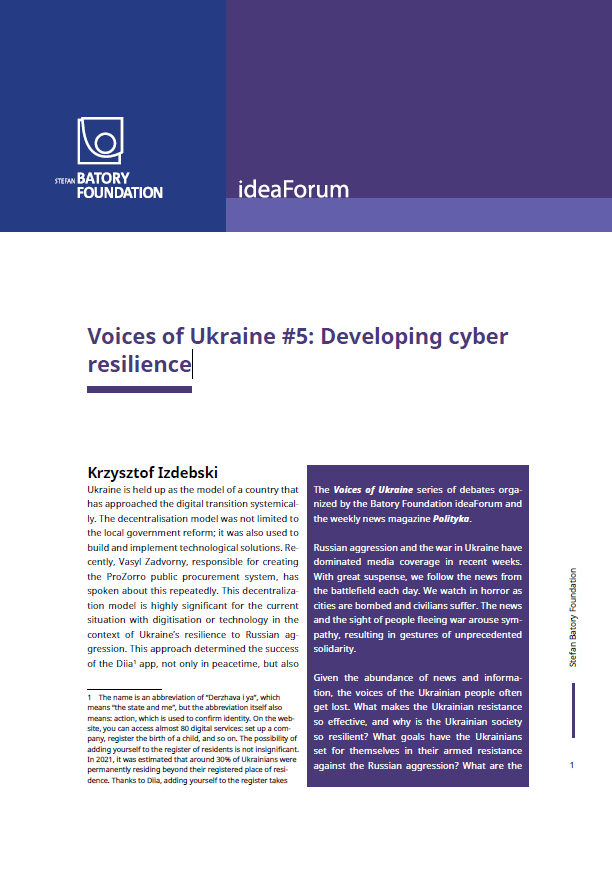 Translation of debate in the “The Voices of Ukraine”. The main topic of the fifth discussion in the series was the question about the sources of
Ukraine’s digital resilience. Ukraine is seen as an example of a country that has systematically approached the digital transformation. The decentralization model was not only implemented in the context of local government reform, but was also used in the construction and implementation of technological solutions. This determined, among others things, the success of the Diia (Дія) application, not only in peacetime, but also in war. Technologies have also helped the Ukrainian state to increase its effectiveness in the fight against corruption and to involve citizens and social organizations in public life. They form the basis for the widely admired commitment of Ukrainians to supporting the war effort also on the Internet. Are Ukrainian citizens themselves satisfied with the digital transformation? What the cooperation of various sectors in its introduction looked like and how does this model work in wartime? The discussion took place on 15 June 2022 with the participation of Mstyslav Banik, Olena Hunko, Nadiia Babynska, Viktor Nestulia and Krzysztof Izdebski as the interviewer.