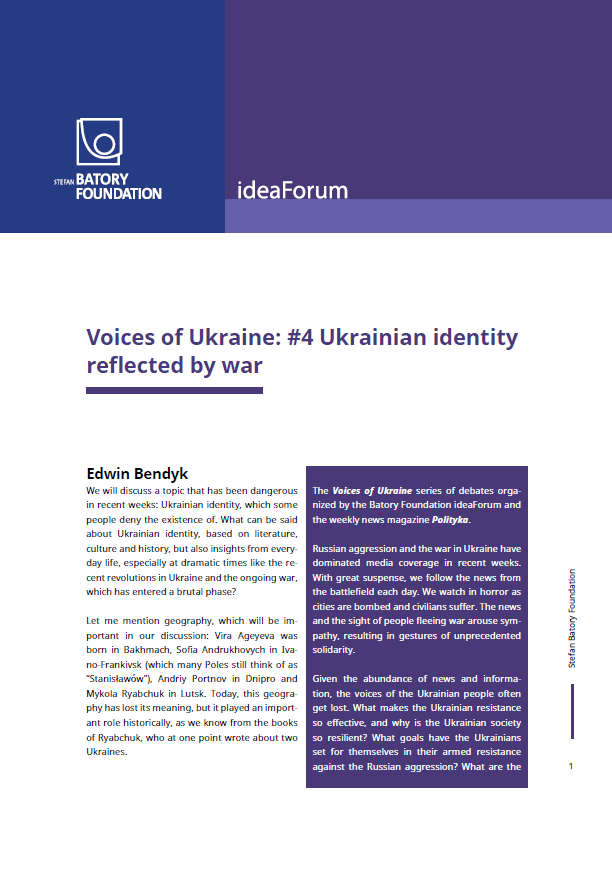 Translation of the fourth debate in the “The Voices of Ukraine” series. When following the news on Russian aggression in Ukraine, we have no doubt that this is where the future is now being made, and that it will largely depend on the men and women of Ukraine. That is why we invite Ukrainian experts, publicists and journalists, as well as people of culture, to talk to us. The main topic of the fourth discussion in the series was the question of Ukrainian identity as reflected by the war. What does the war, and especially its newest edition, i.e. the attack of Russia on February 24, say about the identity of Ukrainian men and women? Is the tragedy of recent months, as some argue, another – after the Holodomor, the Executed Renaissance, the Chernobyl catastrophe and the Revolution of Dignity – breakthrough that shapes contemporary Ukrainians? Can it be said that the experience of disasters of almost apocalyptic dimension marked the Ukrainians with special awareness?
The discussion took place on May 4, 2022 with the participation of Vira Ageyeva, Sofia Andrukhovych, Andriy Portnov, Mykola Ryabchuk and Edwin Bendyk as the interviewer.